The summer ladder competitions officially ended on 20th September, although the ladders have been left open for members to continue to arrange play. I hope everyone has enjoyed the opportunity for some friendly, but competitive matches and the chance to meet and play new members.

The committee decided that it was not practical to hold a finals weekend or other competition events this year. Instead, the highest ranked mens’ and ladies’ singles players will be directly awarded the club titles. Moreover, the highest ranked doubles team will be awarded the Karen Wignall trophy. I’m pleased to announce that the top-ranked players, as of 20th September, and hence our club champions for 2020 are:

Congratulations to all our winners! Their titles are well-deserved. The winners’ names will be added to the boards in the clubhouse in due course.

Given the positive feedback on the summer ladders, we’ve decided to run winter ladders starting Saturday 17th October, and continuing until the end of March 2021.

The winter ladders will run over a longer period, as playing opportunities will be more irregular in the darker and wetter months. Players will no longer be dropped places if they can’t play for an extended period and a longer time will be given to arrange and play challenges.

All existing players and teams on the summer ladders will be rolled over to the winter ladders at their current positions, but scores will be reset.

If you don’t want to play in the winter ladders you can either withdraw from a ladder or choose to temporarily leave a ladder. Please don’t remain on the ladders if you have no intention of playing though. You can always rejoin in the summer.

If you haven’t played on the ladders and would like to join, then this would be a great time. To sign up just go to https://app.tennisrungs.com/Public/Register/80451371 and register, then choose to join the singles and/or doubles ladder. New players will join at the bottom, where the level should be easier. If you need a partner for combined doubles, please contact Penny who may be able to help.

If you played in the summer ladder, but found the level too difficult, I’d encourage you to have another try, as some natural sorting of the players has now occurred and everyone should be able to find a level at which they are comfortable. I am happy to move players down the rankings, if they wish.

As the weather may be poor for prolonged periods over winter, players might like to consider booking indoor courts at Carnegie or John Charles (South Leeds) if the outdoor courts are unsuitable. Costs of indoor booking should be shared equally.

Below is a very brief summary of how St Chads teams fared through the summer of 2019.

Barkston Ash
The Barkston Ash mixed team won division 2 of this league so will be promoted to division 1 next summer – congratulations to everyone who played any matches for this team!

An exciting season for the A team in Division 1 saw things come down to the last match when St Chads were narrowly pipped to first place by Adel who were the only team to take points from us – congratulations to them. The St Chads B team finished in 3rd place in Division 2 after some hard fought matches so just missed out on promotion to Division 1.  This is a fantastic achievement for this team, which gave many members their first taste of competitive play

The ladies team finished 6th out of 7 teams in Division 2 so will have to wait to hear their fate regarding relegation to Division 3.  Again, many new members had the opportunity to play for this team and enjoyed the challenge of match play.

Unfortunately the mens A team had to withdraw from Division 2 mid way through the season.  It was an amazing achievement for a small club to get a team to this level but the standard was very high, so difficult to field an appropriate team regularly

Our mens B team finished firmly in mid table so cemented their position in this division.Thank you

Well done to all who played this season, we hope you enjoyed the competitive play with other clubs in the region.

If you didn’t play this year but would like to be included in next year’s matches across the region then please email Penny.

Some members may not know that Leeds has a thriving tennis league which runs a number of ongoing ladders and tournaments for club players, including a singles league and a veterans league (50+) both of which as St Chad’s Tennis Club members you are eligible to participate in.  For more information follow the links below:

ABOUT THE LTL: The Leeds Tennis League, (to which St Chad’s Tennis Club belongs), has been in existence since 1964, when it was set up by 6 local clubs to give them the opportunity to play competitive mixed doubles.  It has since expanded, and the league now comprises around 90 teams, playing mixed/medley, mens, ladies and junior team tennis.

In addition, there is an indoor winter medley league, which plays at Leeds Beckett University’s Carnegie Tennis Centre, a Veterans League and a thriving Round Robin Singles League open to any player in the area.

The league is run by a team of volunteers, with financial support from the Lawn Tennis Association.

In the Leeds Tennis League last summer (2017) our teams finished as follows:

The mixed team in the Barkston Ash league were winners of division 2 so will gain promotion to division 1 for 2018.

Well done all, another good season for St Chad’s.   If  you are interested in playing for one of our teams in the 2018 season let us know!  Email Jill for further information.

The men’s b team have continued to have a mix of results. Since the last update we have won 2 (7-1 against Adel and an 8-0 walkover result against JCCS) and lost 2 ( 1-7 against Dacre Banks and 2-6 against Roundhay).

There are still 3 games left to play and St Chad’s currently sit 5th with 9 points. So another year in Division 5 is almost secure.

The Barkston Ash mixed team is still riding high and remains undefeated this season after some hard fought and very close matches, many played in the drizzle when our new court surface has stood up well!

The medley A team continues to do well after promotion to division 1 this season although a couple of losses – one at Grove Hill and one at home to Chapel Allerton – have seen the team slip off the top of the table. 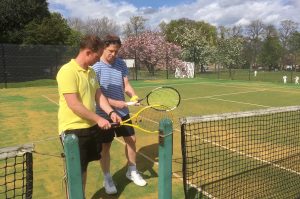